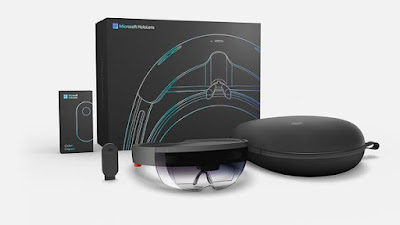 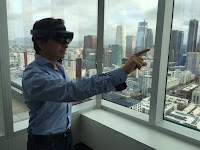 So this past weekend I went to Seattle to participate in the first ever Holographic Hackathon. This event sponsored mainly by Microsoft gave a select number of lucky individuals the opportunity to work with the Microsoft HoloLens device. As an organizer of hackathons for the past few years I was beyond excited to be a participant for a change. True this weekend was not the first chance for me to be around the device, we had several at our AEC Hackathon last month in SoCal, but it was the first time I had an uninterrupted weekend dedicated to developing for it.

For those that are not familiar with this augmented reality headset, see the video below from Microsoft's Build 2016 keynote.

The Holographic Hackathon was held at Fremont Studios just north of downtown Seattle. The venue was a super cool open space with blue lights and black curtains along the walls.

The crowd was an interesting mix of software & Unity developers, audio engineers, artists, and non-technical professionals from various industries. I was pleasantly surprised to see several folks from the AEC (Architecture, Engineering, & Construction) space present and over a dozen others that have participated in either the VR or AEC related hackathons I help organize in Seattle. This diversity of skill sets and knowledge excited me more about the weekend. 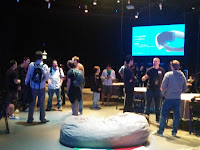 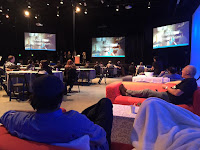 The Friday evening started off with a networking mixer and then with an introduction from the Microsoft HoloLens team, Seattle VR, and Windows Holographic User Group Redmond (WinHUGR) Meetup groups. They laid out the agenda for the weekend, shared with us some great resources to help our hacking, and then opened it up to team formations. People wrote their ideas on a huge paper tablet and either stood at their table or walked around looking for team members or teams to join. While I came with a team of three, none of us are pro Unity developers (the main developing environment for HoloLens) so we actively sought someone who could assist our project. After giving the pitch to a few visitors to our table, we finally nabbed a Unity developer named Nicholas Abel that was excited to help us with our construction related application. After teams formed, HoloLens were distributed two per table and wasting no time we setup and begin holo-hacking away. 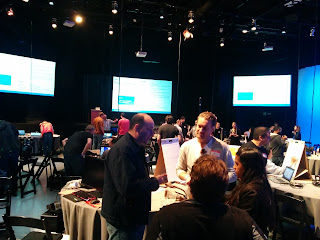 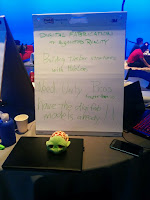 Our Application
The goal of our team's weekend project was to create a HoloLens version of a building application my tech team at IDEAbuilder has developed for VR (video) and browser based web3D using the Kinect (Wired article). This application uses digital fabrication ready 3D models of building components to 1) give the user/general contractor the ability to place these items in a scene to build a structure and 2) provide them a price of our material and machine time costs for fabrication at our factory. Think of the application like a Lego builder app but with pricing information and other data for building real houses.

Getting Started
As stated, I am not a Unity developer. Sure I can do basic things in the game engine but as a open standards web guy with a focus on real world industries, it is not my tool of choice. While the rest of my team got hacking away at the project, I began building up my knowledge of the tool for HoloLens development via the tutorials at Microsoft's Holographic Academy website. Hands down this site is among the best resources I have ever accessed for learning anything tech related online. The video and text tutorials were very clear and gave step by step instructions on how to develop for the HoloLens. These tutorials are so well put together that I feel anyone, even if completely new to Unity, can get up and running with development for the device in no time. I was so excited about the progress I was making with the device that time flew by. Knowing it was going to be a long weekend, I called it quits a little after midnight. 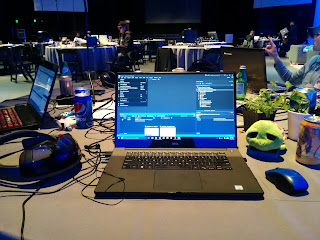 I arrived Saturday morning right after the beginning of the day's presentations that were going to be by various members of the Microsoft HoloLens team. While I was interested in what the presenters had to share, I was more excited about getting back into Unity for more HoloLens development. Wait, did I just say I was excited about getting back into Unity development?!? In all the years of knowing about Unity (David H. is a friend) and times I have HAD to use it I have never been excited about doing so, yet now I was. Seems I have the fever for HoloLens development and I will learn whatever tool I must to do so. 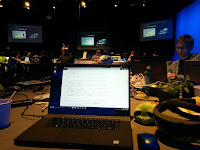 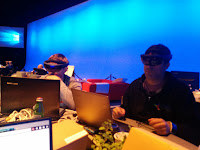 By mid-day I had created a few different HoloLens examples and even had time to show some others how to build for it as well while the rest of my team cranked away at our project. One application I made showed the digital fabrication model of a home IDEAbuilder helped build in Tahoe AR'ed into the room. Seeing this model in the HoloLens impressed the hell out of me as it is a lot of polygons (750,000+) to render in any mobile AR device. While not accurate in its scale, the model still took up a huge amount of the venue's space. The video below of this app was recorded with the HoloLens' video record feature.

I continued my HoloLens education for the rest of the day and night when not helping my team members with items related to finishing our project. I was having so much fun learning and building that 8:00 AM Sunday morning snuck up on me. This is when I realized I should probably nap for a few hours since I pulled an all-nighter and I face planted on a big super comfy beanbag chair.

I awoke a couple hours later to jump back into it with my team. The energy of the room was intense as everyone was getting their projects and presentations ready for the hackathon deadline. At little after 1:00 PM the presentations started and what a variety of projects they were. 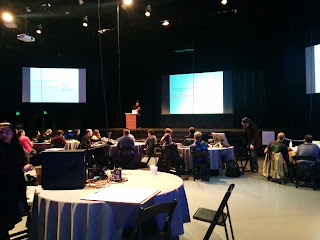 There were close to 20 teams and HoloLens apps for medical, storytelling, shopping, and more. There were even a few AEC related apps by AEC Hackathon alumni. Cody "Kick-ass" Nowak's team made a cool AR measuring app and Willard "the Wizard" Williams showed what architects can do with the device. I could write a whole post on what all the teams created but recommend you check out what they have shared on Twitter using the #HoloHacks hashtag and here at the HoloHacks Facebook page. I hope the Microsoft team puts the videos of the presentations online as well!

This video shows some presentation slides and video footage taken in the HoloLens of our Wall Builder project.

Although our team didn't win any of the three categories and receive the Unity Pro license prize, we all feel the weekend was a huge win and success in itself. I have much love for my team members Chris, Nicholas, and Greg. Thanks guys for all the hard work and awesome time. We really pushed up the bar for innovation in one of humankind's oldest industries.

I learned a lot, made new & saw old friends, and am definitely excited about developing for the HoloLens. Our team is going to polish and take our app much further. I will publish the hackathon version of the Wall Builder app to the HoloLens store in the next couple weeks and update this post with links and make announcements on social media for those interested in trying it.

I thank Dona Sarkar, the Microsoft HoloLens team, and other organizers that made this the best hackathon I have ever participated in as an attendee. I look forward to participating in future HoloHacks and using this device to augmented and improve my reality. Now I just have to get my own to keep the innovation going. :)

**UPDATE - MY FULL REPORT ON THE HOLOLENS**

Unknown said…
World's first Holographic Hackathon!! That sounds just great. I am so glad to see these excellent pictures on your blog. Day #1 pictures are my favorite. I wish I could also attend such a grand event at some local Seattle convention center. If you know about upcoming events then please share!
August 7, 2016 at 10:08 PM

It has been a while since my last post. A lot has happened in the tech space and I will get back to blogging about all that stuff in time. Now I want to take a moment for my first fan. When I started this post, I planned to write something beautiful and poetic that captured some essence of how this person means the world to me. At the moment this is all I can deliver, tears and electronics don't mix. A proper tribute will come at another time. When I went deep dive into web 3D and immersive technologies back in 2000, my mom was my very first fan and supporter. As a self-proclaimed old lady that doesn't understand tech, she still has read every post, seen every image, listened to every interview, and watched every video I have posted about my adventure with tech. My father and the rest of my family are extremely supportive as well, but a mother's love and support is in a class of its own. In my younger years, it was just my mother and me. Looking back, she is the one t
Read more

Spring is a time of new beginnings. Many plants begin to grow, flowers blossom, and the world comes out of winter hibernation. Yet it goes beyond a season and includes ideas of rebirth, rejuvenation, renewal, resurrection and regrowth. In the tech scene, it is also the blossom of a busy conference season. Let's take a look at some of the 'flowers' that attracted this tech bee the past few months. We start with March. Game Developer Conference - San Francisco, USA The Game Developers Conference or GDC  is THE event for those in the gaming industry and related technologies. As an attendee, I saw plenty of virtual reality on the expo floor. Over the past few years it has been amazing to see how companies like Unity, Google, and Facebook have increased the size of their presence at GDC. VR Gaming Summit - San Francisco, USA Following GDC was the VR Gaming Summit . The VR Gaming Summit is a conference focused on VR gaming and entertainment trends. I was an invited s
Read more 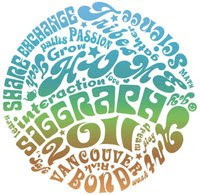 So this August in Vancouver, Canada was SIGGRAPH 2011 . SIGGRAPH (Special Interest Group on GRAPHics and Interactive Techniques) is the annual conference on computer graphics (CG) convened by the ACM SIGGRAPH organization and this was the first time it was held in Canada. The conference was attended by tens of thousands of computer professionals and had a strong presence of Canadian companies, developers, and schools (go figure). As usual, it had great sessions and a busy exhibit floor. I am thrilled to report that the Web3D Consortium BoFs were standing room only with people packed deep and spilling out the doors as there was a huge amount of interest in X3Dom and the current state of X3D for augmented and mixed reality . The WebGL sessions also presented to a full house. Truly a great event for web3D in general. As a fan of digital fabrication, I was happy to see companies like Shapeways , and 3D printer machine sellers there showing off their services and products. There w
Read more