Showing posts from November, 2008
Show all

November 23, 2008
So I am busy doing research with the group on our first set of student Metaverse mash-up projects, and had to post this video to give all a glimpse of what is coming. This is the power of X3D. Enjoy. Special thanks to fellow web3D student Tedd Robinson for his real and virtual world assistance, and Nick Carpenter who loaned out his avatar for the project.
Post a Comment
Read more 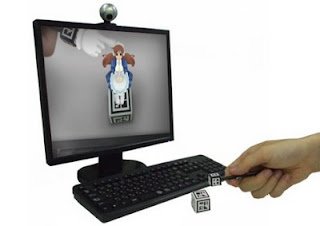 Augmented Reality (AR) is a "Mixed Reality" technology where the virtual and real worlds appear together in a real time system. An augmented reality system generates a composite view for the user that is a combination of the real scene viewed by the user and a virtual scene generated by the computer that augments the scene with additional information. This technology of movies like Minority Report is no longer science fiction, but has been for a while science fact. Even though AR has been developed in research labs and used by the military ( Office of Naval Research ) for decades, it is only until recently that hardware and software is making it more accessible for the mainstream. In order to superimpose graphics over a real environment in real-time, one needs mobile computing, a tracking or identification system, and a display. Now with more powerful cell phones, Iphone, and other hand-held computing devices, AR is primed to move into the mainstream. Google's Android
Post a Comment
Read more
More posts