Showing posts from August, 2009
Show all

A quick response to QR and Data Matrix code. 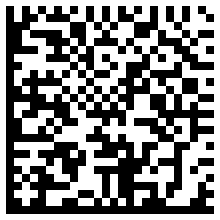 So lately I have been seeing more Data Matrix and QR code around. Data Matrix and QR code is a 2D barcode consisting of black and white "cells" or modules arranged in either a square or rectangular pattern that represent encoded information. Unlike augmented reality markers, data matrix code only represents text or raw data. Data Matrix (DM) symbols are rectangular in shape and usually square, they are made of cells: little elements that represent bits . Depending on the situation a "light" module is a 0 and a "dark" module is a 1, or vice versa. Every Data Matrix is composed of two solid adjacent borders in an "L" shape (called the "finder pattern") and two other borders consisting of alternating dark and light "cells" or modules (called the "timing pattern"). Within these borders are rows and columns of cells encoding information. The finder pattern is used to locate and orient the symbol while the timing pattern
Post a Comment
Read more

This past weekend I attended my first iPhone Developer Camp. This year was the third annual iPhone Developer Camp , IDC 3, which was developers, UI designers, testers, and other that came to share ideas, collaborate, and make some pretty cool apps. The event encourages individuals at all levels to continue to stretch the development boundaries of the iPhone and iPod touch. Held in Sunnyvale at Yahoo's main campus, the main focus of the event seemed to be the Hackathon competition. Saturday and Sunday were nothing but people with heads down on computers as the Hackathon is an exhibition of attendee and those joining via web projects and was a showcase of some of the best iPhone and iTouch innovators. The event had great keynotes and even a musical guest BT who performed Friday night. He came back on Saturday to speak about his app called Sonifi . I have been playing with this $4.99 music mixing app and it is fun. It needs more songs as it only comes with one, but BT ann
1 comment
Read more
More posts