Showing posts from June, 2015
Show all

The AEC Hackathon 2.3 in Southern California was this past weekend in Los Angeles. Held at UCLA's Department of Architecture and Urban Design, the weekend long event brought together technology developers with professionals from the built environment to create technology solutions to industry problems. This AEC Hackathon set new records. While we always have folks at the events from all around the country and in some cases the world, 70% of the people in attendance were not from the SoCal area. A decent amount of us came down from the SF/Bay area and some from as far as the East Coast. We also had the highest ratio of tech engineer to industry personal with over 75% of the folks there having a technical background.  To be expected, the teams developed some pretty amazing hacks. Watch the team presentations in the video below. Winners Best Overall Project:  Team Rhumbix Best Open Source:  Team Holy Donut Best Use of Experimental Tech:  Team Cloud Tango & Team VR
Post a Comment
Read more

An Epic day of Unity with the Seattle VR scene 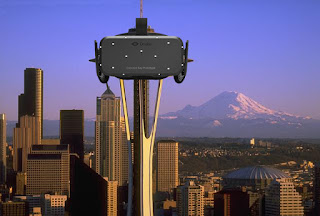 I just had an unforgettable day of VR here in the Seattle area. It started off at Envelop VR's office to discuss an upcoming VR event they organize called SEA VR  and then my buddy Greg and I got to visit both Unity and Epic's local offices. I can't thank Nick and Pete enough for letting us see their VR rigs and try out their VR demos.   I had a great chat with Pete at Unity's office where I got a chance to see their setup and try out the HTC Vive  unit. So far, this headset is by far my favorite HMD. Next up was a visit to Epic Games' office just a few blocks away. While I am not a game developer, I am a big Epic fan. Epic's Unreal Engine is responsible for a variety of games I have loved playing over the years so this was a fan boy dream come true. I also got a chance to see the Oculus Rift Crescent Bay demos that I never stand in line at conferences to see. First up was the super cool demo 'Showdown' that takes the user on slow moti
Post a Comment
Read more

I just left Seattle where I attended the first hackathon for virtual reality in that region. Hosted at the University of Washington's Center for Education and Research in Construction (CERC), the Seattle VR Hackathon brought together virtual reality developers and enthusiasts for a weekend of hacking and a whole lot of fun. There was a nice turnout of folks from the local VR community present including people from Samsung, the Microsoft HoloLens team, Unity3D, and Epic to name a few. Here is a nice writeup by one of the VR hacker teams that came from building firm Mortenson Construction (an AEC Hackathon alumni also).  In addition to a weekend of building cool VR demos, there were informative VR related presentations from Unity3D's Pete Moss, Epic's Nick Whiting, and Matt McIlwain from Madrona Venture Group.   A big thanks to Greg Howes, Trond Nilsen, Michael Lenzi, and Lucky Agung Pratama from Seattle's VR community for putting on this great event
Post a Comment
Read more

This past week was the Augmented World Event . Themed 'Superpowers to the People', this year's event showcased the hardware and software augmenting our lives. The event featured over 200 companies leading the charge in augmented and virtual reality, wearable tech and the Internet of Things. Over 3,000 tech professionals engaged in over 20+ workshops, 200+ interactive demos, a VR experience powered by UploadVR and 100+ AWE-inspiring talks from industry leaders and pioneers. AWE is focused on turning ordinary experiences into the extraordinary and empowering people to be better at anything they do in work and life.     Hands down this is still the best event for the commercial side of immersive technologies that brings together industry leaders from all over the world. There were plenty of folks from Europe, Israel, Asia, and all over the U.S.A. Monday was a day full of workshops with Tuesday and Wednesday being the speaker sessions and expo days for the event.
Post a Comment
Location: Bristol-Santa Clara, Santa Ana, CA 92706, USA
Read more
More posts