Showing posts from March, 2011
Show all

The World at My Finger Tips

So now that we have a Microsoft Kinect at the office (thanks Beesley), here is the first video of me using it to control navigation on digital globe X3D Earth. The display is on our Spatial View 3D projection, no glasses needed, TV for a whole new dimension of coolness. I have to admit that controller free navigation is the way to go when zooming around the planet. I just need to tweak some of the gesture controls and get the whole globe file local so it doesn't take so long to load and tile. Those familiar with my work I am sure can guess where this is going. For those that don't like guessing, stay tuned!
Post a Comment
Read more

A week of the Game Developers Conference 2011 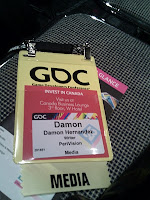 GDC 2011 just finished last week and wow do I have a game developer hangover! What an insane week of intense sessions on gaming, walking the expo floor, aisle conversations, meetings, and great parties. This year I was in on a media pass and got full access to the latest and greatest from the game industry. No I didn't get the Google Chrome Notebooks or Motorola Xooms they passed out to the entire audience of certain sessions, but by far this year's show was the best for things I am interested in. Even though I am not a game developer per se, there were plenty of sessions in areas of interest. The Kinect had several sessions, there was a full day of Unity3D, a few sessions about augmented reality, and some on web3D technologies. A bonus of being media, I got the chance to participate in new product/game releases. Ogmento had a location based multi-player AR game for iPhone that GDC attendees could play called Paranormal Activity: Sanctuary. Find out more about the game
Post a Comment
Read more
More posts