Showing posts from May, 2015
Show all

So Apple has bought the German augmented reality company Metaio. I learned of the announcement via Tweetdeck and Magdalena Rogl's Twitter account where she posted a picture of this document. I send a huge congrats to Metaio's founders Thomas and Peter. Metaio has been around longer than a decade and continued to push the limits of the AR envelope with their computer vision and tracking technologies. I have been a fan of Metaio's technology for some time now as seen in the videos below. It definitely doesn't come as a shock that this company got acquired as they have great augmented reality tech and some good AR patents, but I am shocked it was by Apple and I am curious to see what they do with this technology now. With such big players like Apple, Facebook, Google, and others coming into the AR & VR space, our lives are about to get a lot more mixed with the digital world. Strap in and hold on! *scan this image with the Junaio mobile app
Post a Comment
Read more

Getting creative with Immersive Tech 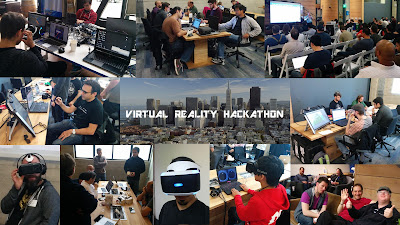 Hacking on the Internet of Things

I just wrapped up presenting at the Internet of Things World Event  and being the Master of Ceremony for the event's hackathon here in San Francisco. For those that don't know, the Internet of Things (IoT) describes the network of physical objects or "things" embedded with electronics, software, sensors, and connectivity to enable it to achieve greater value and service by exchanging data with the manufacturer, operator and/or other connected devices. Each thing is uniquely identifiable through its embedded computing system but is able to interoperate within the existing Internet infrastructure. Watch this video from Mashable below for a very basic explanation. More about the event can be found at the event's webpage and while I did get a chance to walk to the expo floor, most of my time was spent in the hackathon area. The IoT hackers were going after two categories, Best Consumer IoT Project and Best Industrial IoT Project. Participants w
Post a Comment
Read more

Augmented Reality company DAQRI has acquired AR software pioneer ARToolworks , makers of the open source AR platform, ARToolKit. It has been years since I have used the platform myself but this is interesting news.  Here is the news via Business Wire : DAQRI, the leading augmented reality/4D company, today announced the acquisition of ARToolworks, pioneers in the field of augmented reality and creator of ARToolKit, the world’s most popular library for AR application development. DAQRI, already a leader in 4D hardware and software, will make all of the features of ARToolKit’s commercially licensed Pro version, such as the markerless, natural feature tracking libraries, iOS, Android and Unity versions, available free and open source under a LGPL v.3 License, as of today. This includes a commitment to expand ARToolKit, with DAQRI’s state-of-the-art industrial and mobile tracking technologies.   “My original vision for AR involved a future where this technology was part of
Post a Comment
Read more 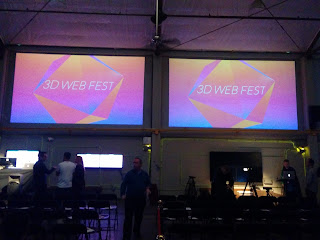 In a post earlier this year I wrote about a 3D Web Festival and its goal to bring together performance artists and Web 3D developers to create new types of art-meets-tech web exhibits. To recap, the  3D Web Festival  showcases websites that are the best mixture of music, art, and technology by those inspired by what’s possible from the best of the best of the 3D Web. The festival will, " bring together the best of the 3D Web - presented as Live Performance Art – amazing, delightful, surprising and at times disturbing" . We just finished up the first show held Wednesday May 13, 2015 in San Francisco and what a success it was. There were creations by selected artists and developers of all kinds showing off their best 3D web sites live with musical accompaniment. Guests got to participate in a panel session with selected performers on the future of the 3D Web including audience Q&A. Also, in true support-the-arts fashion the ticket proceeds from this event went to the
Post a Comment
Read more 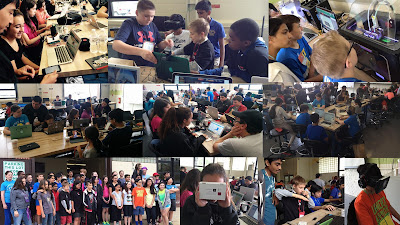 This past weekend was the first VR Hackathon MINI. The VR Hackathon is a community driven weekend long event focused on bringing together the brightest minds interested in virtual reality and related technologies to develop innovative hardware and software solutions, have fun, and build out the future of immersive technology. The VR Hackathon MINI is a one day hackathon for grade school students and this first one featured students from grades 5th - 8th. While the event suggested tools like Minecraft, Playingmondo, and Unity3D, students had the choice to work with whatever development tools they wanted. MINI was organized by Marianne Malmstrom (XP Galaxy) and Rurik Nackerud (XP Galaxy) with help from Mark Tronicke (Bergen Makerspace), me, and the folks from the Web3D Consortium. Participating sponsors and organizations included Autodesk, Playingmondo, and Futuristas, a group that focuses on getting more young girls into STEM programs. Students came from the following schools
Post a Comment
Read more

So the AEC Hackathon just wrapped up its event in Dallas over the weekend of May 1-3. The event was held at the Tree House , a co-working space in the North Dallas area in the small town of Addison. Being a native Texan, it was great for me to be able to work with the local organizers Todd and Joe from Rogers-O'Brien , Brian from the Beck Group , and all the sponsors that made this happen. By far they did it bigger in Texas with the amount of tech in the house. There were virtual reality headsets, augmented reality glasses, 3D printers, drones, 360° cameras, neural brain controllers, various haptic devices including Leap Motion and much more. There were also some really impressive hacks. See the presentations from the teams in the video below. A big thanks to the group from PolyPrinter that made this 3D printable bottle opener for the event. Make sure to visit their site and grab the 3D model file from Frank Lima’s Makerbot Thingiverse page to 3D print your
Post a Comment
Read more
More posts