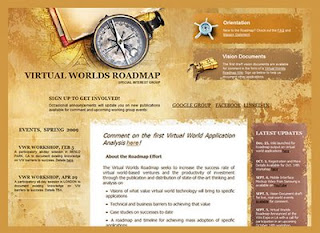 Last week I donned my Web3D Consortium hat and participated in the second meeting of the Virtual Worlds Roadmap. Sponsored by Intel, Samsung, Electric Sheep Company, NGI Group, and Digital Space, the Virtual Worlds Roadmap seeks to increase the success rate of virtual world-based ventures and the productivity of investment through the publication and distribution of state-of-the-art thinking and analysis on:
This was an intimate group full of familiar faces from the virtual worlds space. The 3D web open standard (X3D) had great representation at the event from both the Web3D Consortium and Exit Reality. Many in the crowd were impressed by the power of the open standard. A series of various industry demos and applications I showed throughout the day featured interactive 3D content working across multiple platforms and players to show true interoperability .

Led by Victoria Coleman and Sibley Verbeck, representatives from IBM, Intel, Samsung, Stanford, Sun, Web3D Consortium, and other companies discussed the roadmap for the group and broke into working groups to focus on future applications for virtual worlds. The groups focused on applications for the health industry, entertainment, enterprise, and museums. 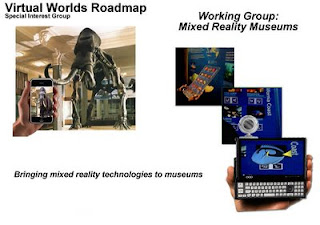 I joined what became the Mixed Reality Museum working group and am very excited about the prototype application we discussed. So excited actually I became a nerd on a mission and am finishing up on a mixed reality example for our group's next meeting.

Metaverse One - Upgrading to Social Media With my recent blogs about digital worlds, I wanted to take some time to promote those people that are making a difference in our real one. Founded by Kate Stohr and Cameron Sinclair , Architecture For Humanity ( AFH ) is a non-profit charitable organization that seeks architectural solutions to humanitarian crisis and brings design services to communities in need. Cameron's outreach can be seen everywhere i ncluding interviews on CNN, TED , Sundance Channel (with Cameron Diaz ) and h is book Design Like You Give A Damn is a great read I highly recommend. Today seemed a great day to blog about this proactive organization as it is the launch week of their 2009 Open Architecture Challenge : Design the Classroom of the Future. We believe that where resources and expertise are scarce, innovative, sustainable and collaborative design can make a difference. By tapping a network of professionals willing to lend their time and their talents to helping those who would not other
Read more