Showing posts from January, 2009
Show all

With my recent blogs about digital worlds, I wanted to take some time to promote those people that are making a difference in our real one. Founded by Kate Stohr and Cameron Sinclair, Architecture For Humanity (AFH) is a non-profit charitable organization that seeks architectural solutions to humanitarian crisis and brings design services to communities in need.

Cameron's outreach can be seen everywhere including interviews on CNN, TED, Sundance Channel (with Cameron Diaz) and his book Design Like You Give A Damn is a great read I highly recommend. Today seemed a great day to blog about this proactive organization as it is the launch week of their 2009 Open Architecture Challenge: Design the Classroom of the Future.

We believe that where resources and expertise are scarce, innovative, sustainable and collaborative design can make a difference. By tapping a network of professionals willing to lend their time and their talents to helping those who would not otherwise be able to aff…
Post a Comment
Read more

The whole world in our hands 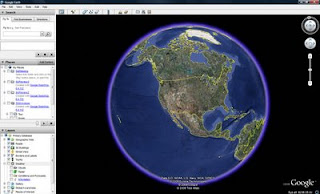 Mirror world is the term used to describe a digital recreation of a globe. Google Earth, Microsoft's Virtual Earth, and NASA WorldWind are popular examples of mirror worlds. As the mixed reality Metaverse emerges, these digital globes will integrate more with our day to day.

Let's take a look at Google Earth (G.E.). Formerly Keyhole's Earth View Finder, this is a proprietary digital globe that most people are familiar with. One can zoom around the planet, turn on/off different layers of information, import 3D content via SketchUp , look at stitched 360 panoramic images of cities with Street View, links to the web, Google Ocean, and a host of other features.

Here is my current residence built in SketchUp, and put in location on Google Earth. Lots of cool functionality but regardless of who makes or adds the content, Google owns the experience. Not a true mirror world in the sense that no one entity owns our real planet.

A key element in the Metaverse, the convergence of the digital world with real, is Geographic Information Systems (GIS). So this weekend I took the chance to participate in my first OpenStreetMap mapping party. OpenStreetMap (OSM) is a free editable map of the whole world that allows you to view, edit and use geographical data in a collaborative way from anywhere on Earth. The data is under a Creative Commons license, contributed by OSM members, and collected by portable GPS devices, aerial photography, and a variety of free sources.

Led by Sarah Manley (a great hostess) from CloudMade, the gathering was full of volunteers surprisingly from all around the country. After a brief presentation to OSM, I signed out a Garmin eTrex GPS unit, and hit the town. The unit was set to record my position every second so I became a nerd on a mission. This was my first time with a GPS unit, other than one in a car, and I wanted to collect coordinates on everything of interest around the city. In ad…
1 comment
Read more

Some old news here as back to back holidays and projects have sidetracked me from posting this earlier. On Friday November 14, 2008 Stanford Open Source Lab had its first Open Source unConference. Hosted by Stanford's Metaverse man Henrik Bennetsen, it was an intimate turnout of those supporting open source tools and technologies.

The event grid had great topics and speakers for all the sessions. There were several sessions on Drupal (the open source content management platform), I caught Vladimir Bacvanski's engaging session on Javascript and the Dojo Toolkit, and finished off with Gene Leybzon's session explaining and showcasing some cool applications he developed for Google's Android open free mobile platform.

Gene Presentation For Android
Only natural to have a session on the open standard for the 3D Web/Metaverse and cover its open source players. Thanks to Web3D Consortium Board member Dr. Michael Aratow for also participating in this sessio…
Post a Comment
Read more
More posts